Cultists! The Knights of the Mystical Sword.

I was digging through my stacks of unpainted and I found a bag of cultists.  Some were from Artizan Design, some from Pulp Figures, and a couple from Rattrap Productions, though they no longer show on their page.

To start, we have the High Potentate of the Mystical Sword, by Pulp Figures. 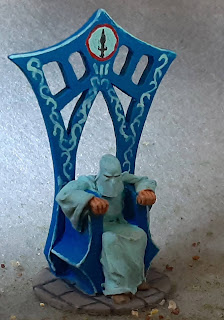 The tommygunners, all from Artizan Design. Since they only have the crest on their hoods, they are the Ultimate Protectors of the Mystical Sword. 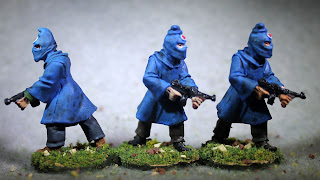 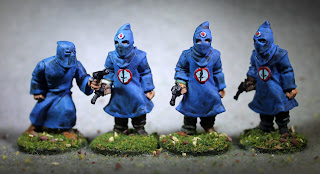 The Knight Keeper of the Mystical Keys, from Artizan Designs, the cage is plastic and came with two enormous piles of chain. 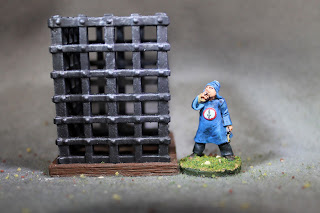 I believe that these two figures had Rattrap engraved on the bottom of their bases. The figure in the brown suit has the only nickeled pistol because one painted black disappeared. Since they have earned neither robe nor propper hood, they are merely Acolytes of the Mystical Sword. 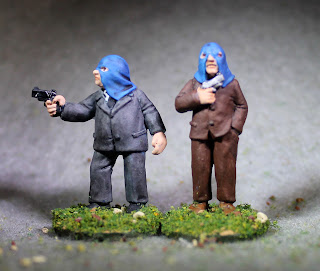 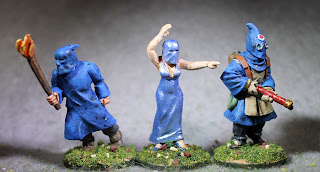 Here are my cultists, eager to Purify the non-believers with bullet and flame.

Email ThisBlogThis!Share to TwitterShare to FacebookShare to Pinterest
Labels: 28mm, Adventures in the Lost Lands, Artizan Designs, Back of Beyond., painting, Pulp Figures, Two Hour Wargames

flashcove
Been wargaming since the early 1960's, starting with a mimeographed set from Jack Scruby and Airfix figures. After a long hiatis, and running into Larry Brom and Bob Kelso at conventions, I began again with Ral Partha and Falcon.